Find this article at:
go.ncsu.edu/readext?701300
— Written By NC State Extension 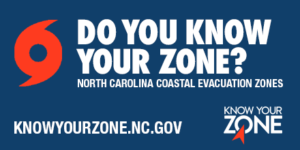 Last week, North Carolina announced the implementation of the Know Your Zone initiative for the state’s coastal communities. The state has worked with 20 coastal counties to create predetermined evacuation zones to help coastal residents stay safe from the impacts of hurricanes, tropical storms, and other hazards while allowing for simple and orderly evacuations.

“The goal of Know Your Zone is to educate coastal residents and visitors about their evacuation zones so that everyone knows the zone they live in and knows to look and listen for that zone when evacuations are ordered,” said Public Safety Secretary Erik Hooks. “Knowing your zone and when to evacuate can save lives.”

Development of the zones by county officials began with storm surge modeling from North Carolina’s Hurricane Evacuation Study. County officials were able to use the study maps to determine the potential for inundation, and combine that with population data, as well as previous local experience with coastal evacuations to draft the evacuation zones needed for their county.

There is an online address lookup tool for residents in coastal counties to find their zone.